When PE giant KKR created Emerald Media, a $300 million equity-based platform, in late 2015, its investment model exemplified a stark contrast to the traditional PE investment strategy of a standalone buyout, re-structure and exit.

A “platform” consists of a horizontal merger of two or three sector-specific investments, called “add-on” deals. Value creation in a platform is primarily dependent on operational synergies of scale and scope between these investments, as opposed to the traditional PE levers of financial restructuring of a standalone firm. For instance, in the case of Emerald Media, scope complementarity was evident in CA Media’s (the focal investment) distribution reach, YuppTV’s (the first add-on) exceptional technology platform and Amagi Media’s (the second add-on) content delivery model. The culmination of these individual investments (Emerald), with each firm bringing unique yet compatible capabilities, allowed KKR to build sufficient scale in the growing digital media space in Asia.

“Buy and build” vs. the leveraged buyout

Add-on investments differ significantly from traditional buyouts even on capital structure. An add-on deal is about one-third the size of a leverage-backed buyout in terms of deal value and predominantly equity-backed. Eventually a platform, like a standalone firm, can be exited through trade sale once it reaches a substantial scale to attract institutional capital or an IPO. However, the holding period of a platform is comparatively longer as it takes time and effort for the post-merger synergies to come to fruition. So platforms are highly capitalised by equity – one needs time to ramp up cash flow before leverage can be applied. While add-on deals comprised only 5 percent of accumulated deal experience globally in 2004, it was more than 20 percent in 2016 (Figure 1). Their increasing prominence reflects the urgency for PE firms to diversify their strategy in the face of increasing buy-side competition and high asset prices (Figure 2). The trend also represents PE fund managers taking operational synergies seriously, although they have traditionally been financial disciplinarians of their buyout firms. 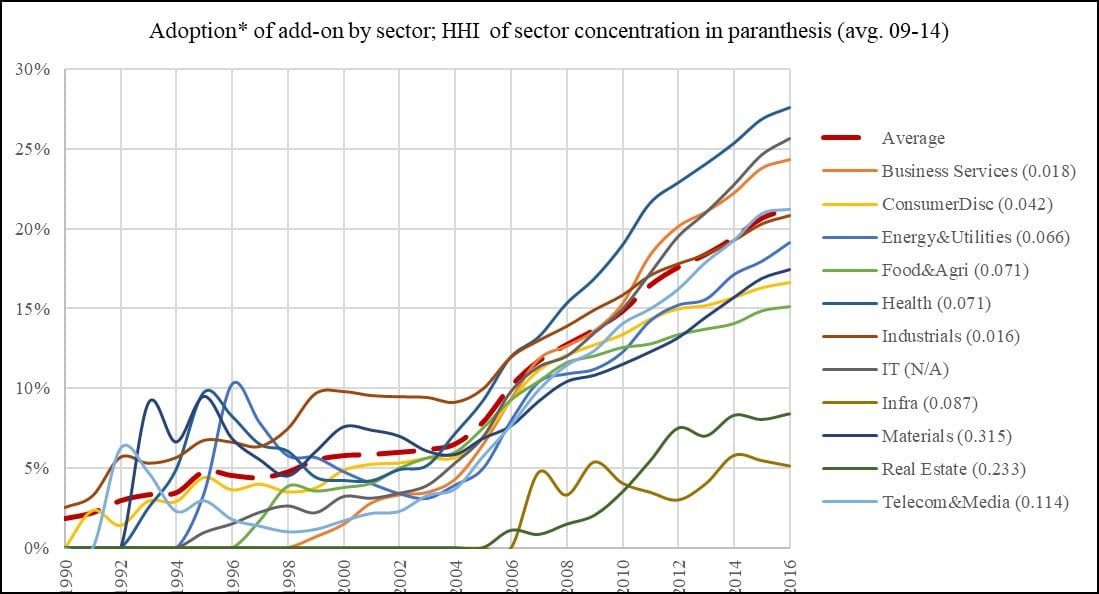 Given how different the platform strategy is both strategically and financially from the traditional PE model, the simultaneous pursuit of both business models for a PE firm is challenging. Research at INSEAD has begun to look deeper into the question of which PE firms are better suited than others to “buy and build” platforms. We are also working to identify the strategic modes PE firms adopt to make a transition to this model.

According to our research (data spanning 4,000 global PE firms, over 55,000 deals between 2004-2016 from Preqin), the earliest entrants using this model were the large-capital players such as KKR, Blackstone, Carlyle and Apollo Global Management (the “Big Four”). Nearly 15 percent of KKR’s portfolio was comprised of platform investments as early as in 2004. A critical aspect of platforms is the way operational control is relinquished to leaders who are experts in the relevant sector. Operational expertise is the key to extracting the most value out of a platform. KKR’s decision to appoint executives with vast experience in the media sector as CEOs of Emerald Media shows the firm’s awareness of this vital strategic facet of platform deals. In fact, as in the case of Emerald Media, often the CEO is the head of the focal investment which initiates the platform and is possibly even a co-investor along with the PE firm.

In general, the degree of platform adoption for these large players remains modest (20-25 percent of portfolio as of 2016). Given their large pile of uninvested capital, access to debt and strong legacy relationships with their limited partners, the large-cap PE firms remain predominantly vested in the traditional model of standalone leveraged buyouts (LBOs). Instead, the platform model is being used as a differentiation strategy by mid-cap players who do not have a legacy of LBOs. For some of these players, platforms account for 70-75 percent of the overall investment portfolio today.

Furthermore, we find that PE firms with portfolios that span multiple sectors adopt the platform model more readily. First, high diversity provides a PE firm with more options to “buy and build”. For instance, if a PE firm already has investments in oil & gas, retail, healthcare and technology, it is easier for this firm to build a platform around one of these sectors as opposed to a focused PE firm that has investments predominantly in the retail sector. Second, high sector diversity is a sign of “exploration propensity” that translates into innovation in investment strategy when the opportunity beckons. This was the most likely reason why the “Big Four” were the first entrants into this model. However, exploration does not necessarily translate into a high degree of adoption or institutionalisation of the strategy. Interestingly, it is easier for mid-tier, focused firms to institutionalise the platform model in their overall business mix. This indicates that a simultaneous pursuit of portfolio scope expansion and a diversified investment strategy is difficult, and PE firms may ultimately have to choose to specialise in one or the other.

For fund managers, a platform strategy can be a differentiator if its managed well and pursued through innovative means such as deal-syndication with corporate partners as in the case of Emerald Media. In the future, competitive advantage may reside not only in superior portfolio design in terms of choice and turnaround of investments but also in organisational design which can facilitate innovative models of investment such as platforms.

At its core, the platform investment model is an example of business model diversification. This diversification strategy is useful when demand for a firm’s product (in the case of PE, firms ready for exit) is durable yet production becomes costly in the wake of environmental change such as a recession or resource scarcity led by increasing competition. An innovative diversification strategy which includes altering the means of value creation through the same product provides an additional dimension for strategic differentiation apart from traditional strategies of altering product-market scope to grow and tap into new customer segments. The simultaneous pursuit of online and store format retail by players like Walmart is the most popular example of such a strategy. However, beyond technology-enabled diversification of physical businesses into the online space, the phenomenon of business model diversification is relatively under-explored and hence immensely interesting for researchers and practitioners alike.

Prothit Sen is a PhD candidate in Strategy at INSEAD.

The author thanks Professor Claudia Zeisberger and the GPEI at INSEAD for their invaluable support.